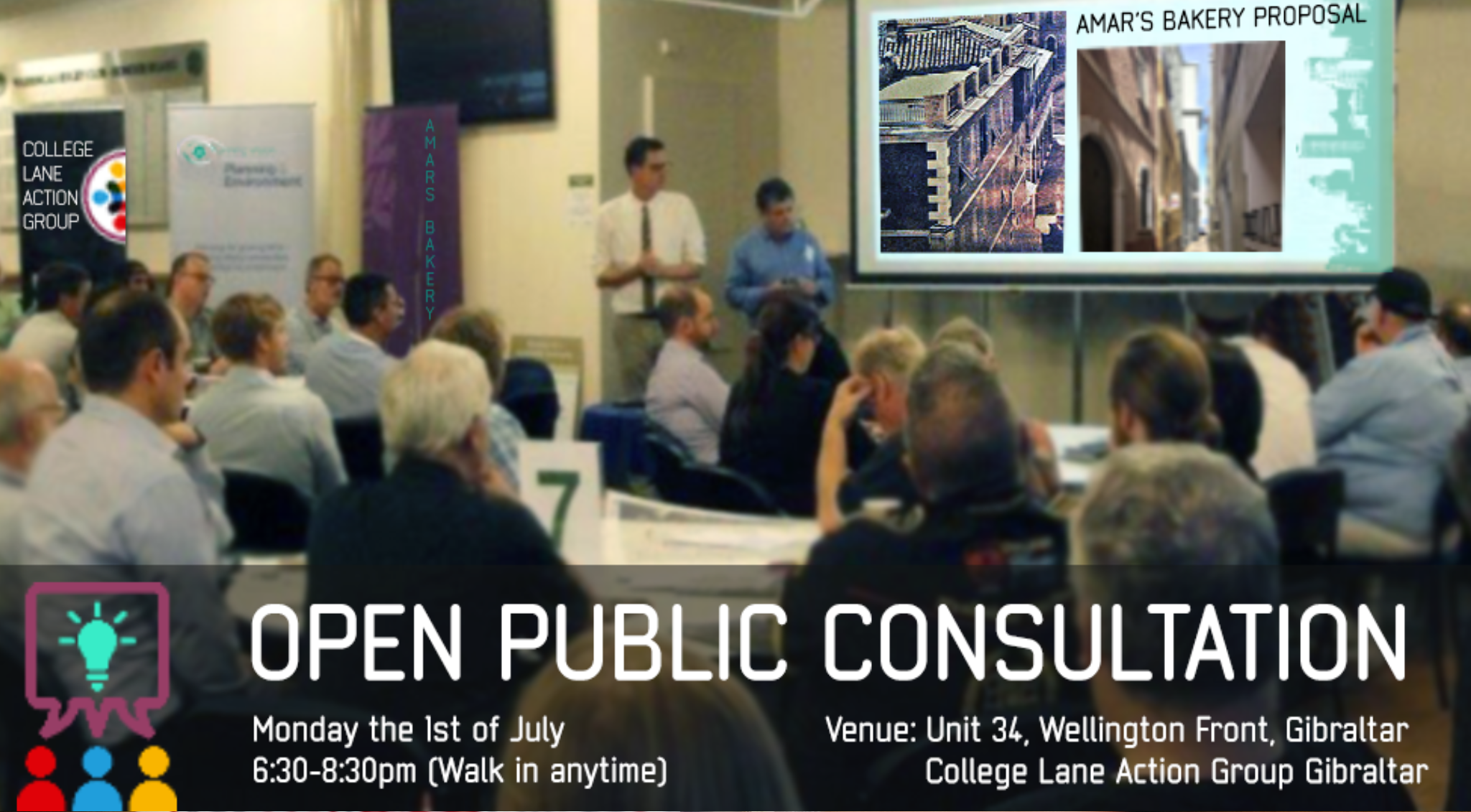 You too can contribute to decision-making which affects your town.

With little time spent you can make a real difference.
Simply click on the button below and answer a few questions.

Gibraltar has entered into another transformative period in its history due to various pressures, resulting in its built fabric undergoing a significant change with a number of new projects planned and many already under way. The Old Town of Gibraltar and its boundary in particular is under an immense pressure from development, combined with lack of appropriate infrastructure, as well as many individual buildings and building clusters left in a state of disrepair, a result of years, if not decades, of lack of appropriate maintenance and care. One example of this are buildings situated at number 47 Line Wall Road & 15 and 17 College Lane, located on the corner of Line Wall Road and College Lane, 4-storey residential properties with integrated retail use on the ground floor facing Line Wall Road, with additional entrances from College Lane.

Recently, a development proposal has been submitted to the Development and Planning Commission seeking demolition and new build. In order to view the proposal submitted by the Applicant’s team, which further explains the rationale behind it, please click on the button below:

There is a general understanding and acknowledgment that heritage buildings are an important element of Gibraltar’s social capital and that heritage conservation provides economic, cultural and social benefits to local urban communities. Good urban revitalisation/re-use/re-development not only involves diversifying economic activities, but also harnessing the heritage value, as well as preservation and enhancement of the build and social fabric.

‘a fundamental principle of good design is to understand and respond to, the context into which the proposed building is to be placed’ (Gibraltar Old Town Design Guide)

Existing buildings, whether they are of great historic significance or not, form a significant part of the real estate asset with opportunities for change and reuse. Pressures on land and increasing density in city centre locations can result in buildings being demolished and replaced, thus forever lost instead of being adapted and revitalised/rejuvenated and enhanced instead, which is more often than not, proven to be more sustainable in context of the assessment of the lifecycle of a building.

The buildings we see on site today at 47 Line Wall Road & 15 and 17 College Lane give a false impression of history. The buildings are of significant age and despite the recent alterations carried out approximately between the 1950-1965, the core structure is typical of the Old Town of Gibraltar. This decision has proven to have had a long-standing negative effect on the aesthetic of the building, however it can be rectified through retention and reinstatement of the façade.

College Lane Action Group (CLAG), a locally based group of individuals whom reside in the area and seek to safeguard the character of the Old Town, commissioned Planning Vision to assist them by undertaking an independent, objective assessment of the site and the aforementioned proposal in context.

The independent assessment can be viewed by clicking on the button below :

The assessment demonstrated that the buildings have been altered with a cement façade and additional storey added, as well as replacement windows, sometime between 1950-1965. Prior to these alterations these buildings were very characteristic to the Old Town in their appearance. It is therefore considered that demolishing the building and its replacement with new built modern design would result in a loss of part of the character of the Old Town, especially considering that with a degree of willingness and care the charming Georgian buildings can be brought back to their former glory and enhanced instead of being destroyed. Financial viability of a scheme, although is acknowledged to be a relevant consideration, should not outweigh planning policy and other material considerations. Demolition of properties, which clearly suffer from lack of long-term adequate maintenance, and their replacement with new build should not be permitted at an expense of the local community.